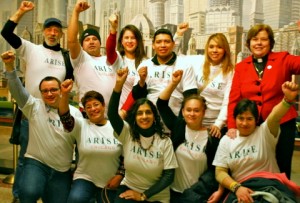 ACWC is a membership-based community resource for workers, both immigrant and U.S.-born, to learn about their rights and organize fellow workers to improve workplace conditions.  Arise Chicago opened the Worker Center in 2002.

In addition to publishing the most comprehensive workers' rights publication, in Spanish, English, and Polish, in the state of Illinois, ACWC holds signature popular education-style workshops where workers hear from other workers and learn their issues are not isolated. Learn More

Our worker-members are primarily Latino and Polish immigrants, almost half of whom are women, who have made a commitment to educate, organize, and advocate for better working conditions.  Learn More

With the participation of our membership, ACWC has collaborated with nearly 4,000 low-wage and immigrant workers to recover over $8 million in owed wages and compensation.  We have organized workers living in 47 of Chicago's 50 wards.  Learn More 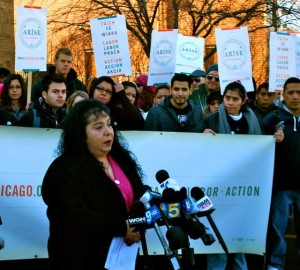 Beyond organizing within their own workplaces, ACWC trains members to take action beyond their workplaces.  This includes: joining a delegation to an employer with another ACWC member; representing the organization at a coalition partner's rally; speaking to the media about the struggle of low-wage workers; meeting with government officials to discuss public policy changes, etc.  Learn More