Arise Chicago was founded by a diverse group of religious leaders in 1991 looking to address systemic poverty in the Chicagoland area. 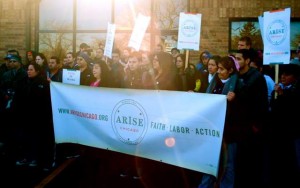 As the number of Chicago workers facing harsh working conditions grew, so did Arise Chicago. With the knowledge that all workers are created in the image of God and therefore deserving of dignity and respect, religious leaders supported workers so their dignity was upheld in the workplace.

In 2000 Arise Chicago opened a pre-apprenticeship program which was recognized nationally as a model program. This program, the Building Bridges Project, was very successful in its goal to place women and people of color into apprenticeship programs until the economic downturn in late 2008, when the program was hibernated.

In 2001 Arise Chicago produced the first Workers Rights Manual in easy-to-read language in Spanish, Polish, and English. The manual, which outlines Illinois-specific laws, has been replicated throughout the country.  Arise provides a free download of the updated 66-page 2009 version.

With knowledge that the basic tenets of all faith traditions support the rights of workers and in response to the many inquiries after the publication of the Workers Rights Manual, Arise Chicago opened its Worker Center in 2002.  To date, Arise has partnered with nearly 4,000 workers to recover more than $6,300,000 in stolen wages and compensation and to eradicate harassment and discrimination from the workplace.

A Leader in the Faith-Labor Movement

In response to the need for systemic change, Arise Chicago has partnered with several religious, community, labor, and academic community partners to seek changes in public policy which will lead to a fuller measure of God’s justice in the workplace.