Arise Chicago is a leading local organization building the way to systemic workplace improvements for workers at the city, county, and state levels. Arise Chicago has joined and founded several coalitions in order to advocate for public policy changes most effectively. Arise trains and organizes low-wage workers and religious allies to advocate for policies that will benefit their families and entire communities. 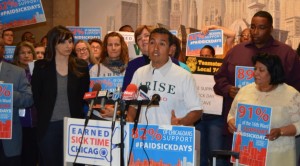 Arise Chicago is a proud founding member of the Earned Sick Time Chicago coalition. After a three and half year campaign, organizing worker members and religious leaders, with our coalition we won a Chicago Paid Sick Days Ordinance in June 2016. The groundbreaking law covers workers at all employers of any size, expands the definition of family, includes coverage for issues related to domestic violence and public health emergencies including school closures. The ordinance goes into effect on July 1, 2017 and will impact 460,000 workers. 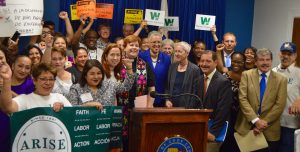 Arise Chicago is a proud founding member of the Earned Sick Time coalition that organized to win passage of the Cook County Paid Sick Days Ordinance in October 2016. The ordinances goes into effect on July 1, 2017 and will benefit 441,000 workers in Cook County, outside of Chicago. Together with the Chicago ordinance, over 1 million workers will benefit.

Arise Chicago is a proud founding member of the Illinois Domestic Workers Bill of Rights coalition. After a five-year campaign of training and organizing workers, religious leaders and allies, and educating legislators, in August 2016 we won the Bill of Rights! The law went into effect on January 1, 2017 providing home cleaners, nannies, and care workers with basic employment protections including the state minimum wage, one day of rest in seven, and freedom from sexual harassment. The victory made Illinois the seventh state in the county with domestic worker protections. 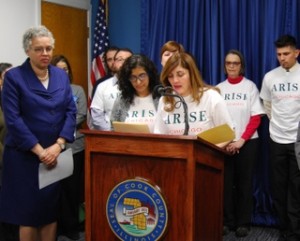 Inspired by a large Arise Worker Center workplace justice campaign a Chicago suburb, Arise Chicago partnered with the Cook County Board of Commissioners to create ground-breaking legislation at the county level. The ordinance, passed unanimously in February 2015, revokes or denies tax incentives or business licenses to corporations found guilty of wage theft.  The ordinance went into effect on May 1, 2015. Read more 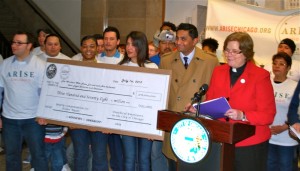 Arise Chicago led the effort to make Chicago the largest city in the nation to have an ordinance that punishes employers who are found guilty of committing wage-theft by revoking or not renewing their business license.  The ordinance was passed unanimously in city council and began to take effect on July 1, 2013. Read more