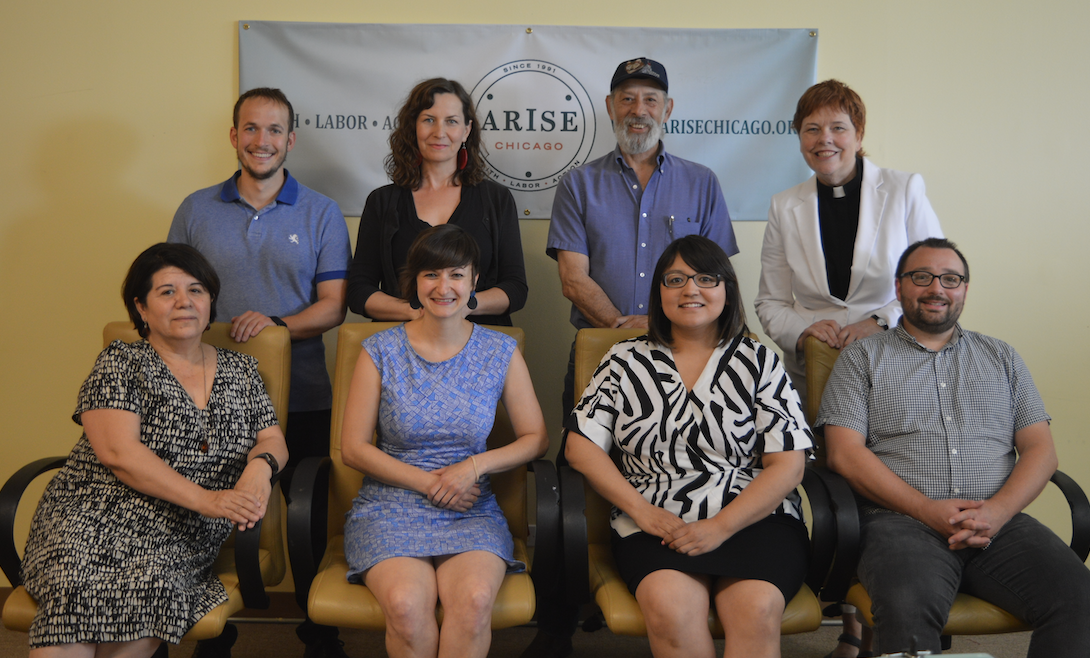 Rev. C.J. Hawking, Executive Director of Arise Chicago since 2007, has been partnering with religious leaders to bring a fuller measure of God’s justice to the workplace since 1993. She has organized faith-labor coalitions in five U.S. cities. She currently serves as the Harry F. Ward Pastor for Social Justice at Euclid Avenue United Methodist Church in Oak Park. Hawking is a visiting lecturer on labor and social movements at the University of Illinois and co-authored Staley: The Fight for the New American Labor Movement (University of Illinois Press, 2009) which won three Book of the Year awards.

Since 2006, Adam Kader has served as the Worker Center Director for Arise Chicago.  Growing up with a Palestinian grandfather and union member parents instilled in Adam an enduring commitment to social and economic justice that he has carried throughout his work. Before joining Arise Chicago in 2006, he worked as an English language instructor for adults in a variety of immigrant community settings in Chicago.  He has also taught a Labor and Social Movements course at the University of Illinois.  Adam received a master’s degree in Urban Planning and Public Policy with a concentration in Community Development from the University of Illinois at Chicago. He received undergraduate degrees in Anthropology and Spanish, with a minor in Gender Studies, from Lawrence University. Besides raising his daughter with his wife, Adam enjoys old-fashioned hobbies including reading books, listening to vinyl records, and taking urban hikes.

Shelly Ruzicka is the great granddaughter of Polish and Czech immigrants, and daughter of a public school teacher--whose experiences all helped shape her worldview. She received her bachelor’s degree in Political Science and Intercultural Studies at Elmhurst College where she received the Founders Award for Service, the college’s highest honor awarded a student. Shelly studied for a semester at Oxford University, and a summer term at Universidad Espiritu Santo in Ecuador. As Arise Chicago's Communications & Finance Director, she manages organizational narrative strategy, press outreach, new media, ally communications, oversees Arise finances, and supports member leadership development. Shelly is passionate about supporting workers to share their stories as a powerful means to win workplace and policy campaigns. She has earned worker member coverage in The New York Times, ABC’s 20/20, New York Times Magazine, Univision Nacional, Telemundo Nacional, The Nation, LA Times, Bloomberg News, NPR, Ms. Magazine, Politico, MSN, Financial Times among dozens of other outlets. She has blogged for Gapers Block, Labor Notes, and Dignity at Work; and has photos published by The Nation, In These Times, Type Investigations, Dissent, Patch, and Gapers Block. Outside of movement work, she enjoys attending film festivals and cooking. She also serves on the Board of Directors of Chicago Fair Trade. Shelly speaks English and Spanish.

Margarita Klein is the daughter of political refugees from Chile and has been dedicated to workers’ rights and social justice for over two decades. Margarita brings a culmination of 20 years experience in the workers rights and labor movement to Arise Chicago. She has experience training teams of workers to create workplace demands, win union representation, and make concrete workplace improvements. Having won awards for Labor Woman of the Year for the Chicago Federation of Labor, 100 of Chicago’s most influential women, as well as featured and profiled with the Chicago Tribune, Margarita brings her experience and passion for workers’ rights and organizing to Arise. Margarita is bilingual in Spanish and English.

Maritere Gomez is a queer Mexican immigrant who grew up in Gage Park, Chicago. She double majored in Social Science and Humanities at Shimer College on a full-ride scholarship. She has taught a Diversity in Education course at the University of Massachusetts at Amherst as well as a workshop on Classism. Her primary interest is in the labor movement. She has been involved in grassroots organizing in the city of Chicago for over 10 years. She is proud of co-building the Immigrant Youth Justice League (IYJL), which initiated the eventual passing of the Deferred Action for Childhood Arrivals (DACA). She has a deep commitment to marginalized communities and is committed to closing the economic disparity between the rich and poor. As an Arise Organizer, Maritere meets with individual and groups of workers to plan strategies to recover stolen wages, end workplace abuse, and improve working conditions. Her work includes reviewing worker evidence, providing leadership development, and planning direct actions. Maritere is fluent in Spanish and English.

Ania Jakubek was born in Poland. She holds a Bachelor’s degree in Public Relations from the University of Warsaw. She came to the U.S. in 1998 and worked as a domestic worker. She later received her an associates degree in fine arts from Truman College. From 2005 till 2010, she worked for the Northwest Neighborhood Federation as an organizer. She is a co-founder of the Polish Initiative of Chicago where she recruited and developed a core leadership team. As Domestic Worker Organizer, Ania recruits and trains domestic worker members, including at a 2-day health and safety, and leadership training in partnership with the University of Illinois at Chicago School of Public Health. Ania is fluent in Polish and English.

Jenny Maoloni received her master's degree in Library & Information Science from Dominican University, and her bachelor's degree in Speech Language Pathology from Elmhurst College. Before joining Arise in 2012, she previously worked at a financial firm and a small business. As Accounts Manager, Jenny oversees all bookkeeping for the organization.

Jorge Mújica was born in Mexico City and participated in several popular movements in Mexico until he moved to the United States in 1987. As a journalist, he worked in several Spanish language newspapers, in Univision and Telemundo Spanish TV stations, and won two “First Place” awards by the National Association of Hispanic Publishers. As an activist, Jorge has collaborated with many labor unions in organizing and election campaigns, picket lines, and strikes, and is a member of several community organizations dealing with Mexico-USA issues, from remittances to the right to vote from abroad. He is one of the three conveners of the historic immigrant rights marches in Chicago in 2006, and ran for the US Congress in 2009, representing the immigration movement in the electoral arena. As Strategic Campaigns Organizer he works with large groups of workers who are interested in organizing for long-term workplace improvements. Jorge is bilingual in Spanish and English.

Luke Sullivan is Arise Chicago’s Religious Organizer, hired after serving two years as a full-time volunteer through the Dominican Volunteers USA Year of Service Program. He graduated from the University of Michigan in 2012 with a Bachelors of Science in Microbiology and Spanish. While in school, he was vice-president for two years of United-2-Heal, an interfaith humanitarian aid organization that collects and redistributes surplus medical supplies from area hospitals and ships them to resource-poor hospitals around the world, focusing mainly on the country of Ghana. As Religious Organizer he builds religious support for Worker Center and union worker campaigns and coordinates the annual Labor in the Pulpit/on the Bimah/in the Minbar program. Luke speaks English and Spanish.