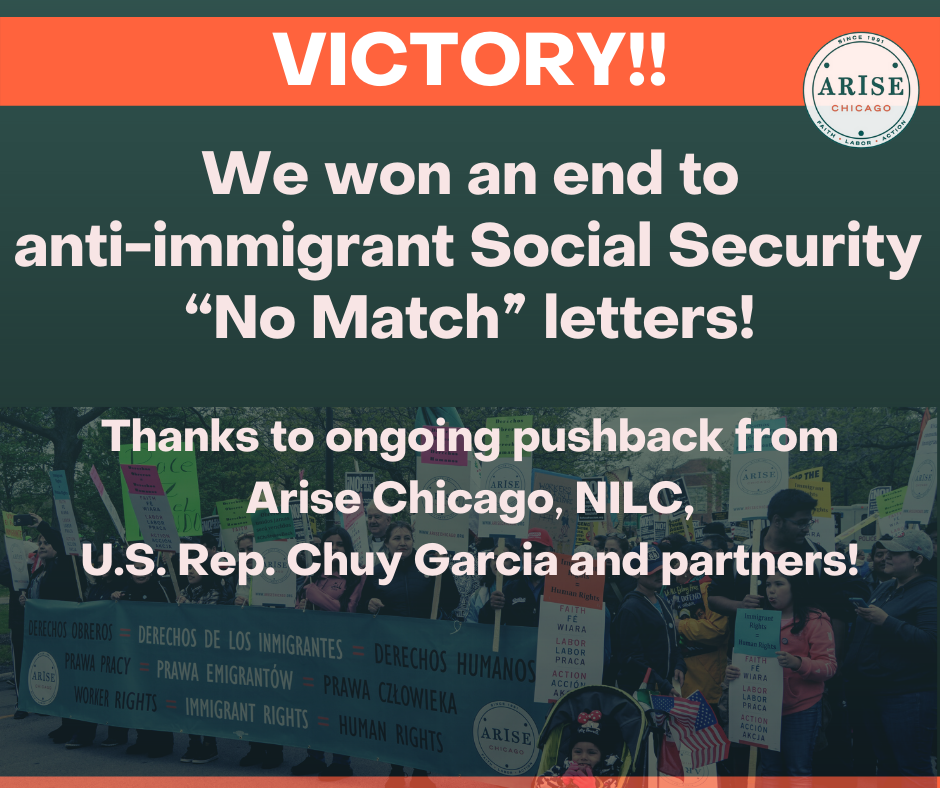 After ongoing push back from Arise Chicago, our partner National Immigration Law Center, additional organizations, and legislators including U.S. Rep. Chuy Garcia, the Social Security Administration recently announced it would end the use of “No Match” letters!

We are thrilled to announce a momentous national victory for immigrant and racial justice.

After ongoing push back from Arise Chicago, our partner National Immigration Law Center, additional organizations, and legislators including U.S. Rep. Chuy Garcia, the Social Security Administration recently announced it would end the use of “No Match” letters!

“No Match” letters are sent from SSA to employers stating there is a discrepancy between a worker’s social security number and contact information, and meant only to make corrections so that workers receive their benefits. Confused employers, and those seeing the letters as an opportunity to punish organizing efforts, often fired workers, primarily from immigrant communities.

Arise and our partners fought back and made incremental victories. Today we are proud to announce the end of Social Security’s use of “No Match” letters altogether.

At a press conference announcing the victory, Arise board member Alfredo Sanchez, who himself was wrongly fired years ago due to his employer’s misunderstanding of a “No Match” letter, shared the news.

“While the letters were supposedly meant to make corrections in the Social Security database, organizations like Arise, saw them for what they were--a direct attack by the previous White House on immigrant workers. After years of Social Security “No Match” letters destroying millions of workers’ lives across the county, today we can say Basta, ya! No more!”

Said Arise Strategic Campaigns Organizer, Jorge Mújica, “Even though the letters said employers should not take any negative action against their employees, we heard from thousands of workers in Illinois and even across the country being fired.  In the past two years at Arise, we provided support and resources to workers to save thousands of jobs.

“Ending the use of anti-immigrant “No Match” letters is a win for immigrant workers, good employers, taxpayers, and for racial and immigrant justice in this country.”

Congressman Chuy Garcia, had a message for employers,

“If you’re an employer and you receive a no match letter, you are no longer obligated to notify workers. These letters are Done! “If you fired a worker because of “no match” letters, it’s time to call them and bring them back.”

“We’re glad to see “No Match” letters go. They were ineffective, costly, and led to worker retaliation. Thank you to groups like Arise Chicago and NILC for your support on this victory.”