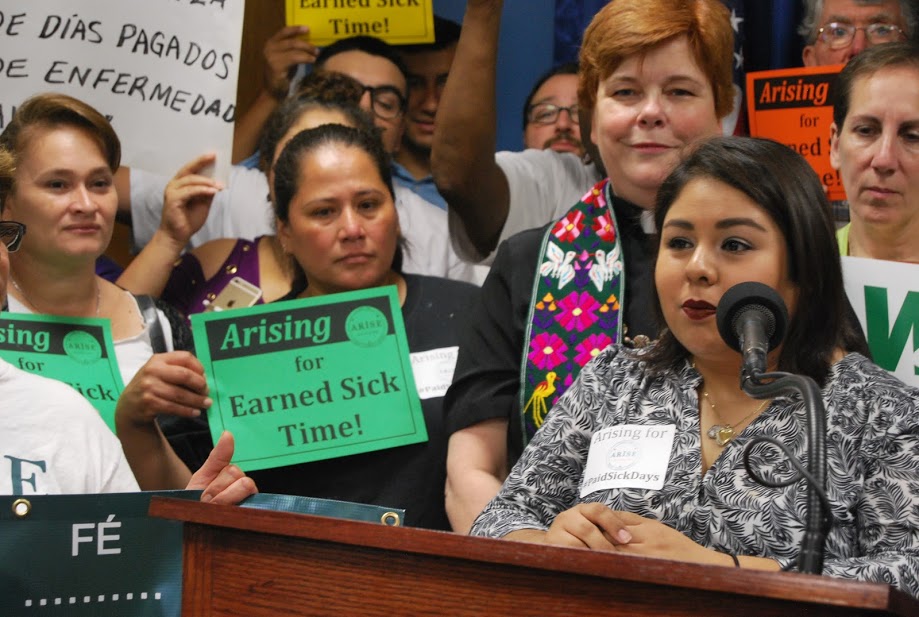 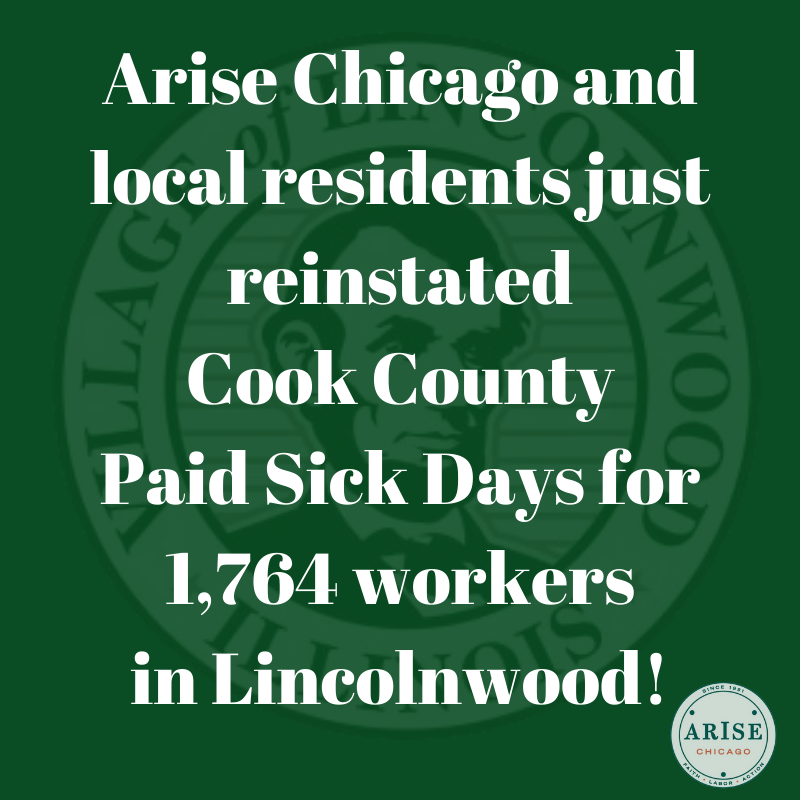 Arise Chicago and its coalition won the Cook County Earned Sick Time ordinance in 2016. The law went into effect in July 2017, and the organization has been on the front lines defending the law and the county minimum wage from attack by chambers of commerce.

However, to the disappointment and outrage of attending residents, the board ignored the will of its voters and who strongly supported reinstating the County minimum wage, and voted to remain “opted out” of the law. The Board’s minimum wage vote, according to resident Ray Grossman, who spoke during the meeting, said that rather than bringing pride to the Lincolnwood community would bring “embarrassment and shame.”

Nearby municipalities including Skokie, Evanston, Wilmette, and Winnetka all follow the County higher minimum wage.

On the sick time victory, Lincolnwood resident Edye Kamensky said, “It is good to see Lincolnwood trustees being on the right side of history for paid sick days, supporting the will of the residents and the rights of the workers.”

Lincolnwood residents strongly supported both ordinances, and communicated their support in the 2018 ballot referendum:

The failure to restore the county minimum wage was a direct denial of voter consent, and local democracy. 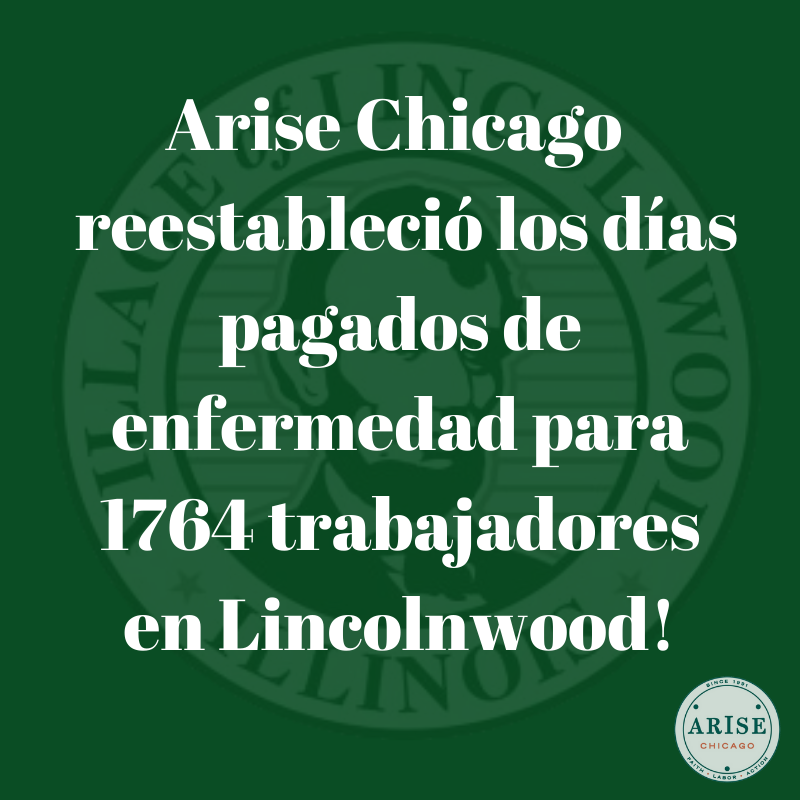 After the vote, Arise Executive Director Rev. C.J. Hawking stated, “Today the Lincolnwood board voted to partially restore the will of the Lincolnwood voters and the rights of Lincolnwood workers.  We applaud the board and residents for acknowledging the workers who serve them each day deserve to be able to care for themselves and their families.”

Though she also expressed concern over the minimum wage vote, “While we rejoice for the 1,764 workers who will have access to paid sick days for the first time, we are deeply disappointed that the Lincolnwood Board decided to leave 2,048 minimum wage earners behind by failing to restore the County wage.”

Arise Chicago’s policy lead Adam Kader said “Tonight’s vote was bittersweet. Lincolnwood workers can now stay home while sick or with a sick child without losing a day’s pay. That pay will just remain too low.”

On the sick time vote, Kader said, “This is a significant moment for Lincolnwood workers who won back the basic workplace protection to stay home when sick and not lose a day’s pay. The victorious sick time vote is also significant for other Cook County suburbs. We look forward to supporting residents in other municipalities to organize to win back both ordinances and win back local democracy.”

Trustee Cope claimed he repeatedly asked for “any benefits to Lincolnwood residents” and received no answer. He was countered by Trustee Sargon who pointed out that several experts, advocates, and research materials prepared for the board clearly laid out the many benefits of both ordinances, including protecting public health ensuring workers are not working while sick. Arise Chicago, in fact, compiled dozens of reports and studies to demonstrate the benefits or both ordinances, and which busted typical chamber of commerce myths about worker protections, especially around increasing the minimum wage. Trustee Cope also failed to take into account the expert testimony provided at the December 2, 2019 informational meeting, requested by the trustees themselves. Testimony provided included the highest level of  expertise: Dr. Kiran Joshi - Senior Medical Officer, Cook County Department of Public Health & attending physician with the Department of Family Medicine at John Stroger Hospital;  Dr. Tessa Bonney - University of Illinois at Chicago, School of Public Health;  Dr. Susan Lambert - University of Chicago School of Social Service Administration;  Dr. Daniel Galvin - Northwestern University, Political Science Department

Trustee Hlepas Nickell said she was voting against the minimum wage for “probably not the reason you expect” citing the fact that government employees were exempt and that this was self-serving. Agains Trustee Sargon countered saying Lincolnwood could choose to include Village workers, and the Village even had data and figures prepared to prose just that. But Trustee Hlepas Nickell ignored this and opted to say that instead of lifting minimum wage workers, and ensure Lincolnwood Village workers were also included, she would rather leave all these workers behind.

With the positive sick time vote,18% of Lincolnwood workers, or 1,764 workers will now gain access to earned sick leave for the first time.

Locally, 21% of workers in Lincolnwood earn minimum wage. Had the board followed the will of its voters, 2,048 workers and their families would have benefited from the wage increase.

The ability to stay home while sick without missing a day’s pay will help lift Lincolnwood workers out of poverty, and help build the local economy.

In December 2019, the Lincolnwood Village Board hosted a public session regarding the Cook County minimum wage and earned sick leave ordinances. Local residents and experts gave presentations to the Board demonstrating that both ordinances are good for workers and their families, especially women and workers of color; good for local economies; good for worker and consumer health; and are consistent with the will of the voters.

Since the Lincolnwood Village Board voted to “opt out” of the Cook County ordinances in June 2017, local residents met with Board members, requesting they listen to voters and research rather than baseless claims from the chamber of commerce.

Some Lincolnwood residents see a failure to opt in to both ordinances as a failure of local democracy, with the Board ignoring the overwhelming will of its voters. Local residents are looking forward to a positive vote to bring back both worker protections at the January 2020 Board meeting.

Cook County passed a Paid Sick Days Ordinance on October 5, 2016 becoming the largest county in the U.S. with such legislation; and a Minimum Wage Ordinance on October 26, 2016, joining the growing national movement for local employment legislation. Both ordinances went  into effect on July 1, 2017. However, the Lincolnwood Village Board voted in opposition to its voters and surrounding suburban communities and “opted out” of the two ordinances on June 9, 2017, thereby taking the County rights away from thousands of local workers.

In an era of “alternative facts” at the national level, Lincolnwood voters were among many suburban residents calling on local elected officials to listen to their voters, who overwhelmingly support both policies, and research-backed evidence. Contrary to baseless claims from chambers of commerce, multiple studies and reports show how such policies benefit  workers, local economies and businesses.

Arise Chicago organized residents in several communities to prevent “opt outs” inc 2017, including Berwyn, Evanston, and Oak Park. The organization supported local committees to protect and win back the protections in several suburbs in 2018 and 2019 including Skokie, Western Springs, Wilmette, Northbrook, and Lincolnwood.

*Arise Chicago and Lincolnwood residents available for interview upon request