CHICAGO–Arise Chicago and the Earned Sick Time Coalition claimed victory as the Cook County Board voted to approve an earned sick time ordinance by an overwhelming majority. 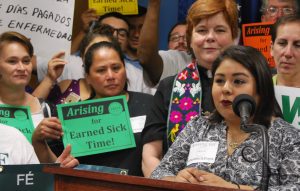 Arise Chicago member and food service worker, Christina Padilla testified before the Finance Committee, “I’m here because many employees all over the county, like me, are forced to decide between staying home to recover from illness and going to work and earning a day’s pay without receiving the proper care that we need, simply because if we don’t go to work we run the risk of getting fired. Many employees are often stuck between the two most important things which is their health or a paycheck.”

The victory marks the second local paid sick days ordinance approved this year. The county vote came just months after a June approval by the Chicago City Council. It makes Cook County the largest county in the U.S. with such legislation. The county also joins a growing national movement of cities, counties, and states passing earned sick time legislation.

Like the city ordinance, the county measure will provide workers with up to five paid sick days per year, with workers earning 1 hour of paid sick time for every 40 hours worked. The accrued paid time can be used for one’s health or the health of a family member. The time can be used for medical visits, in addition to school closings due to public health emergencies and legal appointments related to domestic violence.

Mirroring the Chicago ordinance, the county legislation will go into effect on July 1, 2017.

The ordinance will cover an estimated 441,000 people who work in suburban Cook County. Importantly, many newly covered workers are in the service sector–industries frequently at risk for spreading contagious illnesses due to contact with larges numbers of people.

Commissioners Bridget Gainer (10th) and Jesus Garcia (7th) were lead sponsors on the ordinance, which also had support from President Toni Preckwinkle.

Rev. John Thomas, United Church of Christ pastor and Arise Chicago Board member, helped to gather signatures from 111 religious leaders from throughout Cook County. “This is a significant victory for workers, and those of us in ministry, social services, or health care, who will see the direct impact on families.”

Arise member Martina Sanchez supported the Chicago Paid Sick Days ordinance. Shortly after its passage, her and her husband found new jobs in suburban Cook County, meaning they would not have access to the new legislation. She rejoiced at the Cook County victory. “I’m thrilled for myself and the nearly half a million workers who will benefit from this victory. I’m so happy that the commissioners listened to constituents and workers like me.”