See Arise Chicago’s handouts in English, Spanish, and Polish for charts outlining the wage rates at each level of government, including overtime, rates for tipped workers, and exceptions in the Chicago law.

Arise Chicago’s Executive Director Rev. C.J. Hawking highlighted the importance of the minimum wage increase in this time, “"Many workers are returning to their jobs after months away from a regular paycheck. Ensuring full payment of the new minimum wage is vital to make sure workers don't fall further into poverty.”

Starting this Wednesday, workers in Illinois must be paid at least $10.00 per hour, and $15.00 per hour of overtime.

In Chicago, for the first time, there are two wage rates, depending on the employer size, as well as for domestic workers (home cleaners, nannies, care workers) and some youth workers. Chicago companies with 4-20 workers must increase their minimum wage to $13.50 and $20.25 for overtime, and businesses with over 20 workers to $14.00 per hour and $21.00 for overtime.

The details of each wage rate, including overtime, tipped workers, and exceptions in the Chicago law are laid out in linked charts in English, Spanish, and Polish.

Arise Strategic Campaigns Organizer, Jorge Mújica connected the need for the higher wage to the ongoing pandemic, saying "This wage increase comes at a critical time, when workers risk their health and safety going to work. We know that immigrant workers have been particularly hard hit by job loss and Covid-19 cases at open businesses. It is the employer’s responsibility to pay properly and protect workers’ health and safety. But sadly, we know from experience that workers often have to take things into their own hands to be paid properly. Minimum wage workers across Chicagoland and Illinois should check their check to make sure employers are paying the full new rate. And any workers not being paid properly should report to the appropriate government agency, or call a worker center like Arise."

Reminding both workers and employers that domestic workers are covered by the minimum wage across the city and state, Arise Chicago’s Domestic Worker Organizer, Ania Jakubek stated, “Ever since our coalition won the Illinois Domestic Worker Bill of Rights, which went into effect on January 1, 2017, nannies, home cleaners and care workers, have been included in the minimum wage. Until then, historic sexism and racism that has excluded domestic workers from federal employment law allowed legal exploitation of this majority female workforce. It is so important for domestic workers to know their rights, and for all home employers to pay at or above the minimum wage in Illinois, Chicago, and Cook County.”

Indeed, at a time when our city, state, and country are grappling with racial disparities, it is important to look at the minimum wage through a race and gender lens.

Arise Chicago’s Director of Member Organizing, Margarita Klein emphasized the connection between low-wage work, the pandemic, and race and gender injustice, “The minimum wage increase is also a race and gender justice issue. We know that the majority of minimum wage workers are women, immigrants, and workers of color. We know that low-wage jobs are the least safe and least regulated. We know that Black and Latino communities have been hardest hit by Covid-19. It’s all related. We need higher wages and better protections for low-workers.”

*Arise Chicago organizers are available for interview in English and Spanish upon request. 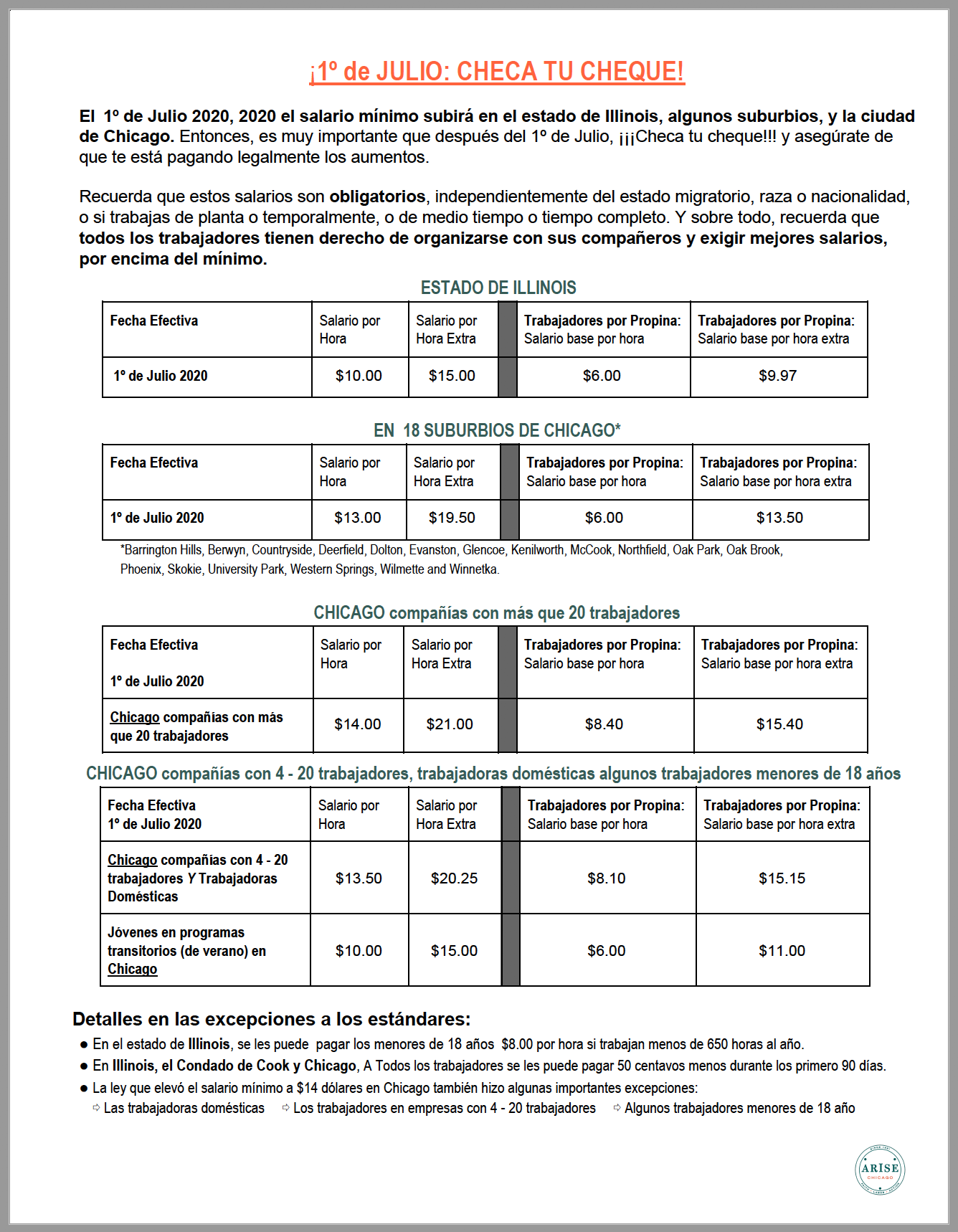 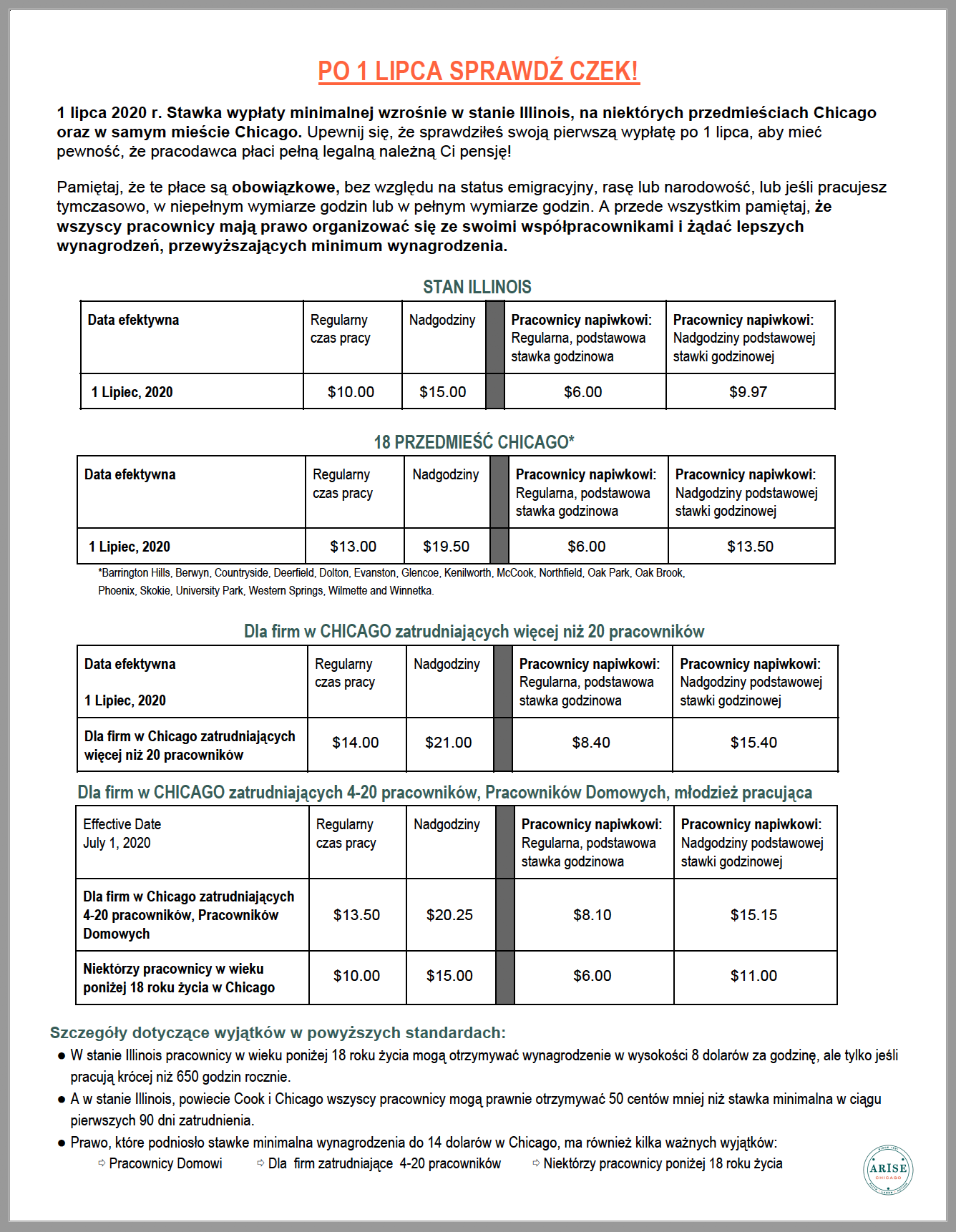 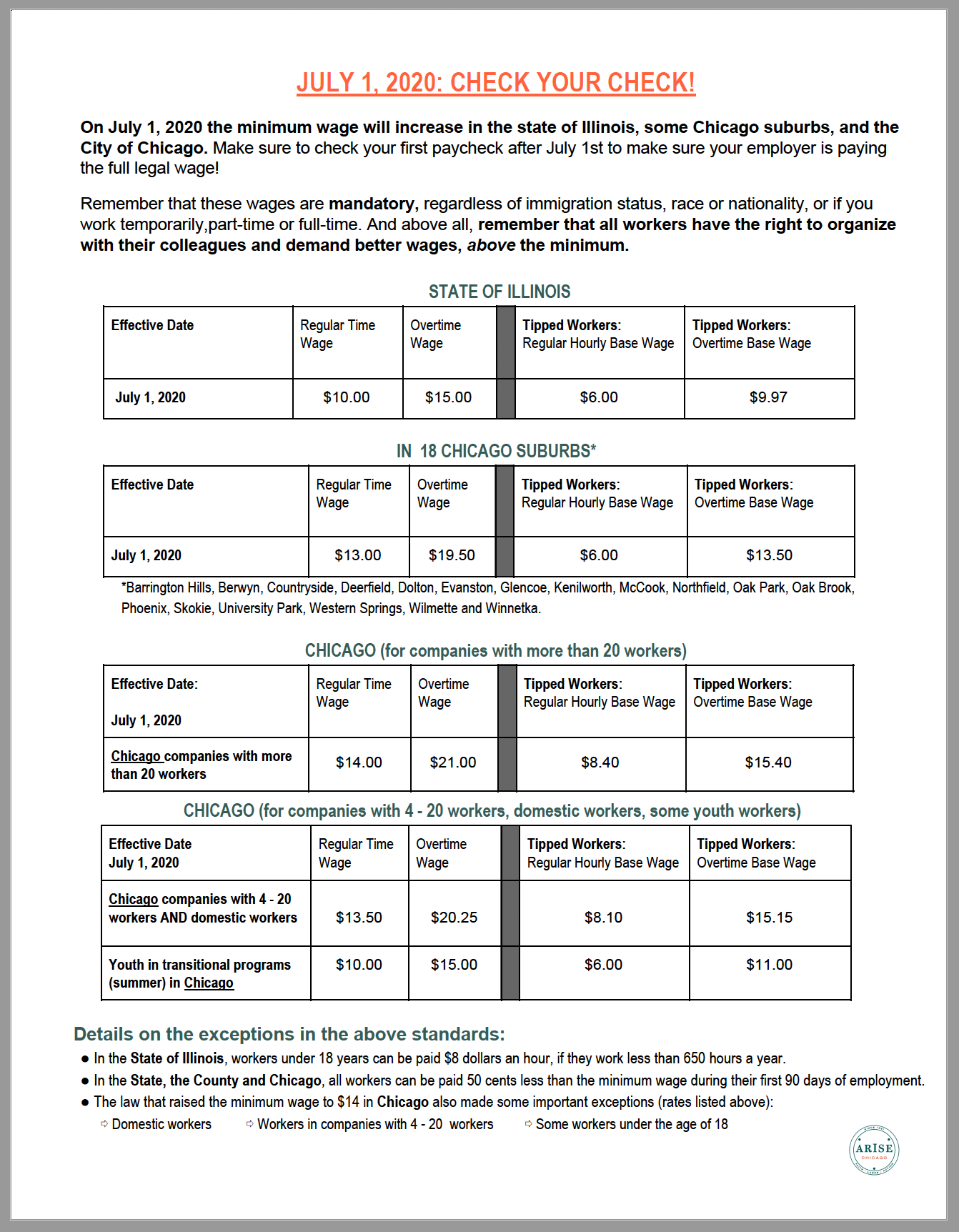