Statement on Release of the Working Families Task Force Report 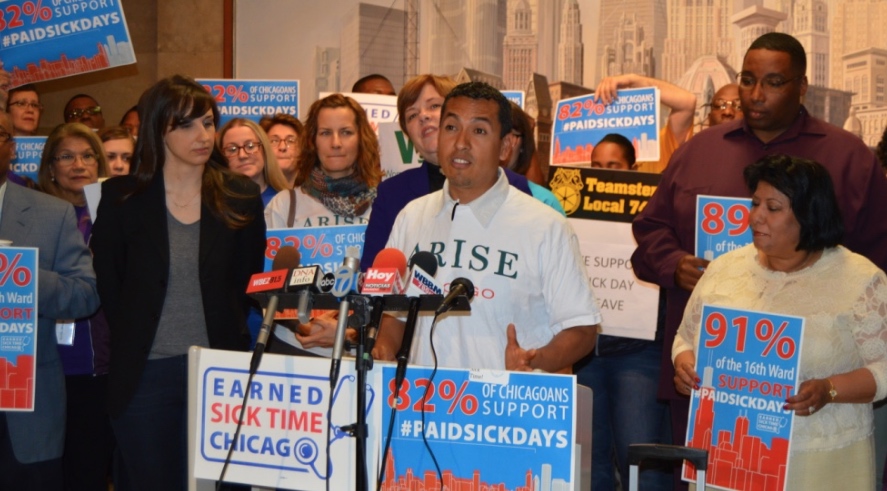 At Arise Chicago we hear daily from dozens of workers in some of the toughest, lowest-paying, and most precarious workplaces across the city. We hear workers express their workplace struggles and needs, as well as their desires; desires to lift up their families. Too often, private workplace policies suppress workers’ opportunities to lift themselves and loved ones out of poverty and to advance in their work life.

There are common-sense solutions within reach. Permitting workers to attend to physical and mental health needs without sacrificing pay or their very job is one such solution. When employers, left to their own discretion, fail to provide the most basic of standards, workers must advocate for policies in the public realm.

That is why three years ago, Arise Chicago joined forces with other workers’ groups and advocacy organizations to form the Chicago Earned Sick Time Coalition. Together, we introduced a paid sick days ordinance and kicked off a city-wide conversation. In the city’s 2015 election, 82% of Chicagoans supported the idea of mandatory paid sick days.  Arise Chicago’s Executive Director, Rev. C.J. Hawking, was selected to serve on the City’s Working Families Task Force, where she advocated for paid sick days as a righteous cause, an economic necessity, and a sensible policy. Arise Chicago mobilized its worker members to participate in 5 of the 6 neighborhood focus groups on the topic and to share stories with the media about their struggle without paid sick days. And Arise Chicago collected signed support from from prominent faith leaders across a dozen religious traditions.

Arise Chicago is pleased that the mayor engaged and listened to the working people of Chicago, including Arise Chicago’s own worker members, who are in need of immediate relief. The report represents recommendations, including a framework for paid sick days, based on the different voices represented on the task force.

We are saddened by the Chicagoland Chamber of Commerce and Illinois Retail Merchants Association’s public opposition to the recommendation. We find it dismaying how out of touch these two interest groups are from the overwhelming majority of Chicagoans.

Arise Chicago urges the Mayor Rahm Emanuel and the City Council to swiftly pass an ordinance based on the Report’s recommendations.

Please direct questions about the report, and requests for interviews about a paid sick days ordinance with Arise Chicago, low-wage workers, or religious leaders to Shelly Ruzicka