Two articles in yesterday’s Chicago Tribune provided a revealing, if unintended reminder of the injustices lying at the heart of America’s public schools.  At New Trier High School in one of the wealthier suburbs of Chicago, all students will have iPads for their course work by the Fall of 2014.  The district will pay about 40% of the costs, leaving families to come up with the remaining $350 in purchase or leasing options.  School officials justify this by touting the educational benefits and by pointing out that this will allow the school to phase out some of its 1200 laptops.  One page away is an article about the school board of the City of Chicago which voted yesterday afternoon to close 50 public elementary schools.  In thousands of districts like New Trier, students are getting iPads; in Chicago, New York, Philadelphia, and many other places, students are getting moving orders and teachers are losing jobs.

Later on in the same paper The Tribune revealed its editorial bias, offering Mayor Rahm Emmanuel space to justify the closings, while devoting its editorial to a cynical and shameful attack on Chicago teachers.  Praising the “heroic” teachers who saved lives in Moore, Oklahoma, The Tribune called on teachers in Chicago to abandon their protest against the massive school closings and become “heroes” by obediently implementing the policies of the Chicago Public School Board and its leader, the Mayor.  Excuse me!  Chicago Public School teachers are already heroes.  They don’t need the condescension of The Tribune.  And they don’t need to be unjustly demeaned as less worthy than teachers in Moore.  Today they need our gratitude for speaking the truth about the nature and impact of these school closings. 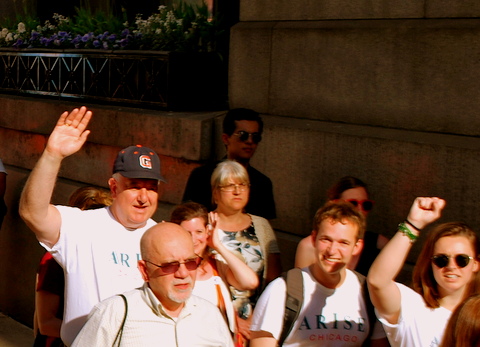 Who makes decisions about public schools today?  The President who attended the prestigious Punahou private school in Hawaii and who sends his daughters to the University of Chicago Laboratory School and the Sidwell Friends School in Washington.  The Secretary of Education who attended the same Lab School in Chicago.  An appointed school board whose membership until recently included billionaire Penny Pritzker, now the appointee to be Secretary of Commerce.  She attended the Castilleja School in Palo Alto where 415 girls in grades six to twelve enjoy the attention of 70 full and part time faculty members.  In Chicago that school would be deemed “underutilized.”  And where do the Mayor’s kids go to school?  No threats from school closings for them.  They, too, are at the University of Chicago Lab School.  These powerful gurus of public school reform didn’t go to public schools and don’t send their children to public schools.  They benefited from the growing educational apartheid in this country and they participate in it today.

I don’t suggest that these policy makers sat down and said, “Let’s close the schools of poor Black and Hispanic kids in Chicago and make sure that New Trier kids have iPads.”  But here are the facts:  The schools closed today in Chicago are 88% black, 10 % Hispanic, and 94% low income.  And next year the kids in New Trier will all have new iPads.  Almost 60 years after Brown v. Board of Education our schools are more and more separate, and more and more unequal.

Please don’t tell me that this is a complex issue, that there are no good solutions, that anguished appointed school board members merely did what they had to do given the economic circumstances.  I’ve read the reports.  I’ve seen the studies.  I’ve talked to experts.  I can tell you what the real story is about charter school performance.  I think I have made a pretty good effort to understand what’s going on.  Whatever the specifics, this is about race and poverty and antipathy to unions and political influence and public indifference (how telling that for a time yesterday morning while the Board was deliberating on its closure vote, the lead online story for The Tribune was Bear’s football hero Brian Urlacher’s retirement announcement).

I have no doubt that the Chicago school teachers will do as much to protect their children this September navigating new routes to schools across dangerous gang lines as the teachers in Moore did for their students when the tornado came earlier this week. They don’t need editorial writers to tell them to do that.  But when their students ask them why their school is gone, just as students in Moore are no doubt asking right now, Chicago teachers won’t have a changing and dangerous climate or the proverbial “act of God” to point to.  Their answers will be equally sad, but far more sinister.

-Rev. John Thomas serves on the Arise Chicago Board of Directors

Originally posted on the John Thomas blog on the Chicago Theological Seminary website.