Chicago Tribune: What would a $15 minimum wage mean to the economy?

What would a $15 minimum wage mean to the economy?

National effort plays out in Chicago too

Originally Posted by the Chicago Tribune 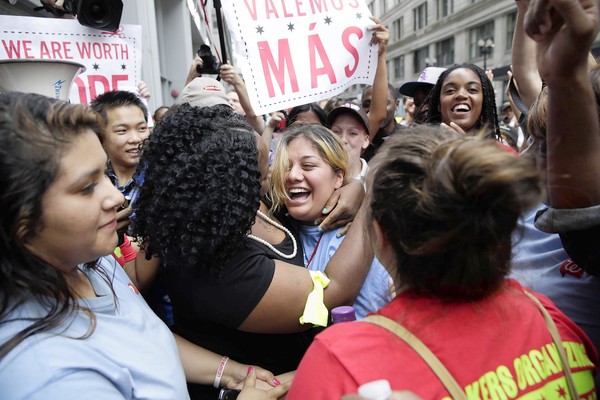 Walgreens employee Trinece Mosley, 24, left, congratulates fellow employee Teresa Anaya, 23, center, with a hug after she walked off the job in solidarity with Chicago fast-food workers, retail workers and supporters as they rally outside Walgreens, 151 N. State St., Thursday, Aug. 1, 2013 as part of a week of strikes in seven cities across the country including New York City, St. Louis, Detroit, Milwaukee, Kansas City and Flint, as workers fight for $15/hour and the right to form a union

A national push to raise employee wages at restaurants, supermarkets and elsewhere to as high as $15 per hour pits labor organizers against business owners in an emotional debate about economics and the cost of living.

Not directly included in the discussion is an important constituency: the customers. If they support the idea of an increased minimum wage, they will likely see higher prices for hamburgers, clothes and other goods.

Economists and others who study consumer behavior say that shoppers may react sympathetically to the call for higher pay for workers in the service industry who struggle to make ends meet, but in the end they will take care of their own needs.

“I would pay a couple of dollars more for products, but the question then is, do I get a raise too? If my salary goes up, I will be willing to pay even more for my products,” R.B. Barrett, 45, said outside a Whole Foods store in the Lakeview neighborhood where about 100 people chanted and passed out fliers Wednesday outlining their demands: $15-per-hour wages and better working conditions.

Business groups say significant wage increases would require many of their members to lay off workers and pass on costs to consumers. Some argue that doubling wages, combined with the increased employer costs for the national Affordable Care Act, could put their members out of business.

“You can’t isolate just the cost of a sandwich at a restaurant,” said Scott DeFife, executive vice president of policy and government affairs at the National Restaurant Association. “Lifting the minimum wage in that manner, to that degree, increases pressure on all of the other industries around it.”

On Wednesday and Thursday, protests were held in Chicago as part of a nationwide movement of organized events that included demonstrations in New York, Detroit and Milwaukee. Many who protested here earn an hourly wage around the state’s minimum of $8.25, which would translate into an annual salary of about $17,000. A raise to $15 per hour would mean a salary of $31,200.

In Chicago, the demonstrations were run by the Workers Organizing Committee of Chicago, a recently formed union backed by local labor groups, including Arise Chicago, the Chicago Teachers Union and local affiliates of the Service Employees International Union.

The workers’ push for higher wages comes as the nation has yet to create all the jobs lost during the recession. There are nearly 12 million people unemployed still looking for a job. Economists say many thousands more have given up hope.

The high unemployment seen in the aftermath of the Great Recession is hurting wages across the board, said Heidi Shierholz, a labor economist with the Economic Policy Institute, a labor-oriented think tank based in Washington.

“There is a very tight link between high unemployment and low-wage growth. It’s just as simple as if your employer knows you don’t have any outside options. They don’t have to pay you wage increases to keep you,” Shierholz said. Those earning the lowest wages, she added, have been hurt the most.

Before the 1970s, wages for most workers grew at about the same rate as productivity, but globalization, politics and economic policy broke that relationship, Shierholz said.

The minimum wage also followed that trend, and if it had continued, she added, the federal minimum wage today would be closer to $18 per hour instead of $7.25. That doesn’t mean that the economy could handle doubling the minimum wage overnight, but it could start increasing slowly, she said.

“This campaign underscores that the wages for the whole bottom swath of the wage distribution are just too low,” Shierholz said.

Lorraine Chavez, a spokeswoman for the Workers Organizing Committee union, said the goal is not to double wages overnight. Workers also want better working conditions and full-time employment. And the union is prepared to continue to strike and plan other events until they reach all those goals.

“Workers have no choice,” Chavez said, adding that at $8.25 per hour, many workers qualify for food stamps and can’t afford to pay rent.

While consumers say they empathize with the struggle, for the many whose wages have stagnated and don’t feel confident about the future, price trumps making a moral or ethical purchase.

“There is a big competition inside every consumer’s mind between really wanting to do something that would help other people and really wanting to save money,” said Kit Yarrow, a professor at Golden Gate University in San Francisco who specializes in consumer psychology.

Yarrow said consumers would likely choose to support a noble cause once or twice, but ultimately personal financial security would win. That’s partly because while consumers feel safe now that the recession is over, they don’t feel OK about the future.

“I think the wound was so deep and so great during the recession and so frightening that it made people kind of permanently a little bit more cautious about spending,” Yarrow said.