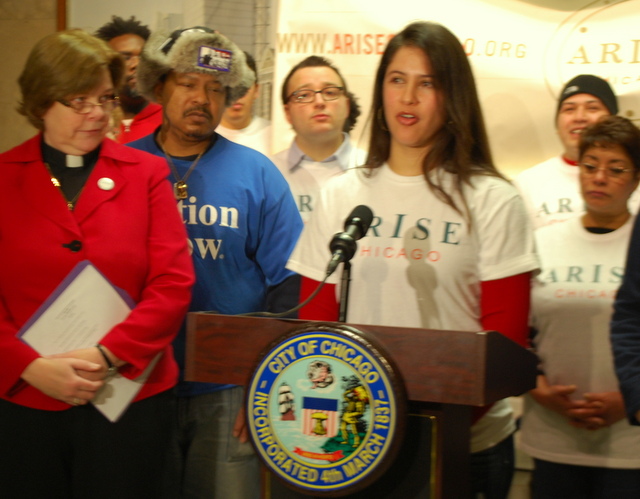 As a result of the months of collaboration between Arise Chicago and Alderman Pawar (47th ward), on Thursday, January 17th, the City of Chicago passed an ordinance stating that, should a business owner be found guilty of wage theft, the owner’s business license could be revoked. This makes Chicago the largest city in the country with anti-wage theft legislation. The ordinance, endorsed by the National Employment Law Project as one of the strongest actions a municipality can take to combat wage theft, will impact hundreds of thousands low-wage workers and their families in Chicago.

“This ordinance helps change the conversation about good business. To be pro-business also includes caring about how employees are treated,” reflected Alderman Pawar (right).   “I think this marks an important step in leveling the playing field for the many ethical business owners in our city.”

Arise Chicago Worker Center member Liliana Baca (below) said, “I worked for over 55 hours a week for five years at a grocery store.  And I never received overtime pay. This is my wage theft story.  But I’m not the only one who has a story.  So many people have had their wages stolen, and this ordinance will help them recover their wages and prevent wage theft from happening to other people.”

The ordinance gives desperately-needed tools to the city of Chicago to ensure employers obey the law.