If passed, the ordinance would be one of the strongest municipal anti-wage theft laws in U.S., and the second of its kind nationally.

Arise Chicago is working closely with Alderman Pawar to advocate for the City of Chicago to respond to the crisis of wage theft.  Ald. Pawar, together with Mayor Emanuel, Ald. Mitts, and Ald. Solis, are sponsors of an ordinance that would allow the City to revoke the licenses of employers who are guilty of stealing the wages of their workers. 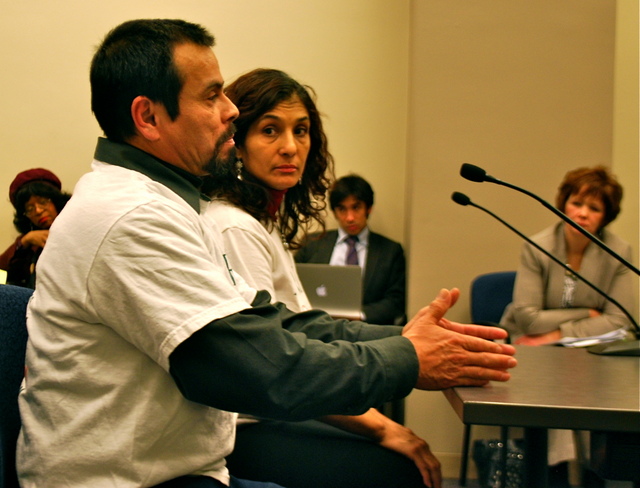 Worker Center member Oscar testifies at the License and Consumer Protection committee meeting about his experience with wage theft at a Chicago car wash.

The proposed legislation passed the Committee on License and Consumer Protection this week, and workers’ rights advocates expect the anti-wage theft measure to pass the City Council in it’s next meeting Thursday, January 17th.  The ordinance would protect workers and defend ethical businesses against unscrupulous employers who steal workers’ wages and create unfair competition.  It would be one of the strongest municipal anti-wage theft laws and the second of its kind in the United States.

Wage theft is a major crisis in Chicago, with an estimated $7.3 million of workers’ wages stolen by their employers every week in Cook County, according to research conducted by the Center for Urban Economic Development.  It is an issue that disproportionately harms the most vulnerable of workers: immigrants are 1.5 times more likely than native-born workers to have their wages stolen, and African Americans are 27 times more likely to have their wages stolen than their white counterparts.

The ordinance is supported by Arise Chicago and other key workers’ rights community organizations including the Chicago Workers’ Collaborative, Centro de Trabajadores Unidos/Immigrant Workers’ Project, Latino Union, and the Restaurant Opportunities Center—Chicago, who are dedicated to fighting wage theft and other forms of worker exploitation.