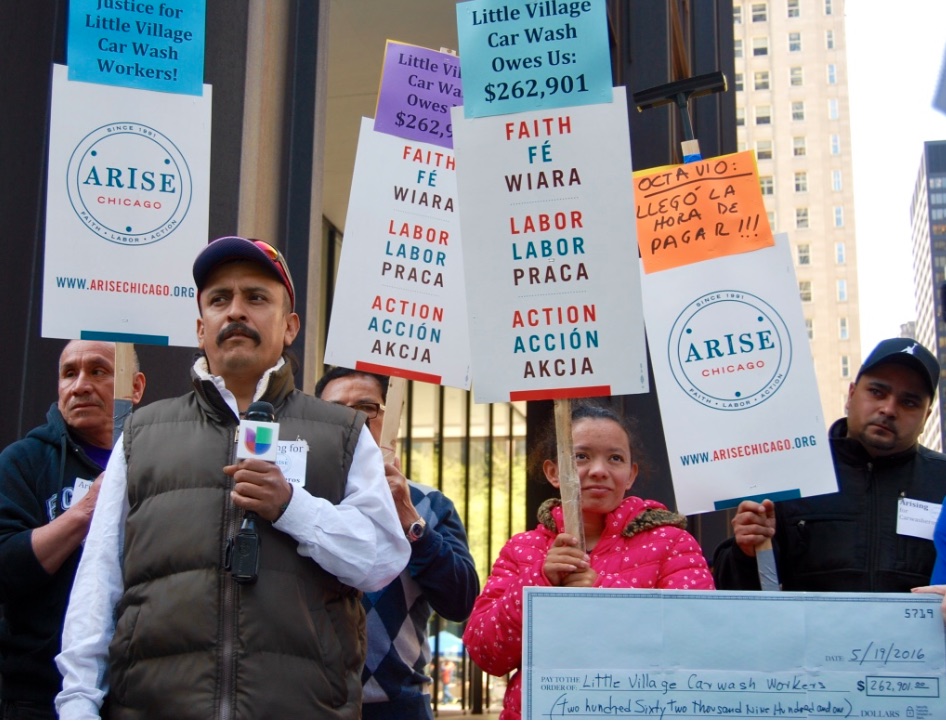 Eight former workers from Little Village Carwash were shocked and outraged this morning when they found out that their former employer, Octavio Rodriguez, instead of presenting his case in Cook County Court, decided to file bankruptcy to avoid paying the $262,000 in wages and damages as ordered by the Illinois Department of Labor.

“When I found out the owner filed for bankruptcy, I felt scammed. We know that he owns other businesses, including two restaurants. He has the money” said former “carwashero” Miguel Angel Martinez. “When we filed our claim for owed wages, Octavio told us he’d rather pay a lawyer than give us a penny. But he has the money and the government said he had to pay.”

“We thought the wait for our wages was over after more than three years, and instead find ourselves at the beginning of a new legal battle,” says former Little Village worker Alfredo Ramirez.

“Owner of the former Little Village Car Wash, Octavio Rodriguez owns several houses and buildings, an upscale Mexican restaurantin suburban Summit, and a pizzeria in Chicago. He  sold the car wash last year for $1.5 million. He has the money, but simply does not want to pay his former workers,” said Jorge Mújica, an organizer with Arise Chicago, who has supported the workers in their nearly four-year pursuit of justice.

Like other abusive employers, Octavio Rodriguez used loopholes in the law to avoid paying workers their legally owed wages.

“Unfortunately, this is a practice is all too common among employers of low-wage workers”, said Sophia Zaman, Executive Director of Raise the Floor. Cases like Little Village Car Wash have inspired Arise Chicago and seven other Chicago-area worker centers, under the Raise the Floor Alliance umbrella, to introduce HB 1290. This bill would allow workers to place a wage lien on employers to prevent them from moving or selling assets in order to avoid payment of owed wages to workers. Additionally, it would prioritize workers’ claims for wages over the claims of other creditors when employers declare bankruptcy.

The former Little Village Car Wash workers voiced their support for HB1290. Had it been in effect now, they would have the ability to collect the legally owed wages and damages awarded by the Illinois Department of Labor. 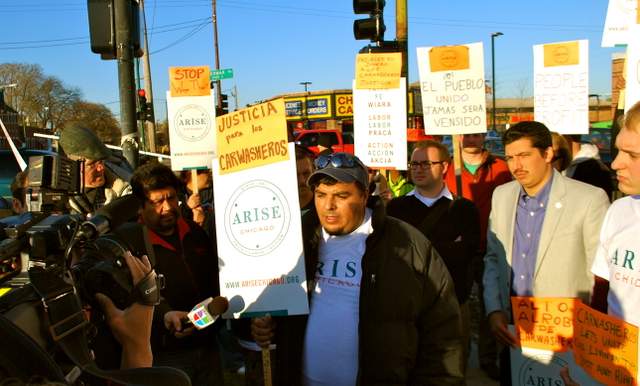 Arise Chicago first started supporting the Little Village Car Wash workers in 2011. After training workers on their rights, Arise found that the owner had systematized extreme wage theft. Rather than pay the legally required minimum hourly wage, car wash owner Octavio Rodriguez divided $5 per car washed among all workers in the crew, regardless of the number working. This often meant workers received 50 cents per car, and on slow work days, went home with as little as $20 for an entire 12-hour day of work.

Workers first filed claims with the US Department of Labor in 2011, won their claims, and the owner began paying correctly. However, after six months, Rodriguez went back to his old practices of stealing wages. Trained and supported by Arise Chicago, the workers then filed claims with the Illinois Department of Labor in late 2012. In May 2013 the workers won their claim, with IDOL ruling that they were entitled to back pay and damages, totaling $262,901. Because the owner never paid, the Illinois Attorney General sued him in October of 2014. The workers had a court date for Thursday, May 19, where they expected to hear a ruling from a Cook County Circuit Court judge on payment up to $262,901. Instead, they received news that their former employer was skirting his legal obligation by filing for bankruptcy.

The full Illinois Attorney General lawsuit can be found here.

Photos from Wednesday May 19, 2016 press conference and previous worker actions in 2011 and 2013 are available upon request.

Interviews with workers available upon request.